Yesterday, during lunchtime at work, I walked to the red brick MAX platform to await the train. As I approached the platform, I noticed something lying on the ground. Upon closer observation I realized it was an abandoned pair of men's shoes in black loafer style.
They lay on the wet brick in the haphazard way of someone who carelessly tosses off their shoes to relax on a sofa. They resided in front of a bench. On the bench a newspaper lay splayed out; its rain sodden pages pressed against the wood slat seat. Strangers, who awaited the next train beside me, glanced casually down at the scene then turned and ignored it like it was nothing out of the normal one would see in the middle of a rainy day in the City.
I however, could not look away. My mind sifted through the puzzle. Why would the shoes be left behind?
The winter wind whipped around me and tugged at the edges of the newspaper pinned to the bench. Pools of rain water beaded on the wood of the bench giving no hint of anyone having momentarily abandoned their reading.
A bum approached the shoes and bench. I watched him closely. Surely, here was the owner of the shoes! I felt a piece of puzzle slide into place then bump up against an obstruction as the bum leaned down, picked up a cigarette butt, then moved on past the shoes as if they were invisible.
Were they invisible? I blinked the rain from my eyes and peered again.
The shoes remained. The newspaper fluttered in the wind.
The Train rumbled up to the platform and I stepped inside the open doors. The door closed and I watched the shoes until a turn on the tracks removed them from my sight.
I leaned my head back against the train wall and closed my eyes. Imagination drifting, I saw a business man harried from a hard day at the office. He sat reading his paper, during his lunch hour, in an attempt to temporarily close out the world around him. His eyes fixed on something in the paper. His spine stiffened. With a nod and a jerk he sprang from bench. He tipped back his head and a rusty laugh spilled from his throat.
"Screw this!" He shouted to the worker lemmings huddled miserably beside him.
Kicking the shoes from his feet, he strode barefoot and free down the sidewalk to begin the life he always dreamed he would live.
I smiled as my imaginations eye watched him stride away; then sobered as I felt the weight of my shoes pressing down on my feet.
Perhaps I should...
Posted by Haphazardkat at 10:55 AM 8 comments

Traveling in my truck on the way to Friends house. A huge rainbow arched over our path. I pointed it out to MiniWarrior...

On the same trip, MiniWarrior called out to "NoName"...

MiniWarrior: "NoName", my Mom's as pretty as an Emerald!

And...Last but not least. Pausing in the middle of play last night...

MiniWarrior: Excuse me, I have to use the Men's room.

MiniWarrior: ...I mean the hairy leg room!
Posted by Haphazardkat at 8:36 AM 6 comments

May this day bring you happiness. Whomever you spend it with and wherever you are.

Shame on you, "Kramer"

Shame. On. You.
Posted by Haphazardkat at 3:10 PM 6 comments

I had a strange dream last night about Kay Goman, my Freshman roommate in college.
She was getting married on November 30th and was expecting me to be her Maid of Honor.
I panicked in my dream as I had no clue what dress she wished me to wear and had one week to find it.
Turns out it was to be Orange (pumpkin orange) and to have the Sleeping Beauty Disney sleeves. You know, the little poofy capped ones?
Gads.

I haven't heard from Kay in years. She was my Maid of Honor long long ago. She wore a beautiful tea length white dress with a satin pink ribbon sash and carried a single pink long stemmed rose. Why she would torture me in my dream by expecting me to wear an ORANGE Disney sleeved dress--I dunno.

Why after all these years would I dream of her? And the specific date of November 30th?

I am a bit haunted this morning. I've found her name in People Search online. I might just pay the 9 dollars and get her phone number. If this was just a crazy dream with no reason behind it, at least I will have caught up with an old and dear friend from my past.
Posted by Haphazardkat at 6:05 AM 8 comments

It's A Mad Mad World: And I Haven't Had My Coffee Yet!

Tidbits of internet news I read this morning while waiting for my coffee to finish brewing.

1. David Gest, (Liza Minelli's ex)is going to be on a reality show in Australia and refused to bungee-jump into the jungle camp for the show’s opening episode like everyone else did because he worried that the sudden change in altitude might ruin the anti-aging injections in his face.

2. Michael Jackson is being stalked by an Australian drag queen...

It's gonna be a Mad Mad kind of day.

Can you feel it? 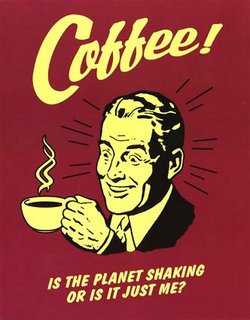 Posted by Haphazardkat at 5:58 AM 12 comments

MiniWarrior got to investigate the inside of a Fire Engine Truck this weekend. 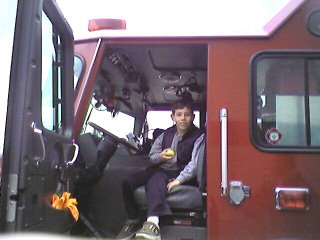 He got to grill the hapless FireFighter with 3 billion questions. 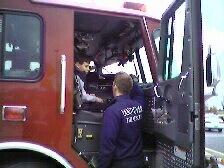 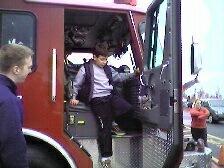 After the billionth question, I took pity on the Fireman (who's eyes had glazed over and mouth had the brain stroke slack look that occurs when one has just been grilled by MiniWarrior) and dragged a still interrogating MiniWarrior away to my truck.

"But Mommmmmm! I still have questions!"

The fireman, who has no doubt run into the full force of a roaring fire without a drip of fear, flinched and ducked behind the fire truck out of MiniWarrior's sight. 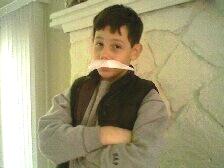 Fear him!
Posted by Haphazardkat at 8:59 AM 15 comments

As requested by Jade... 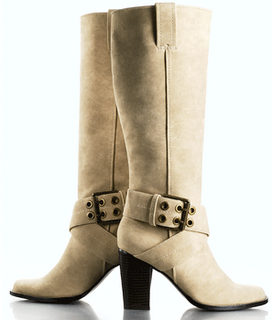 Posted by Haphazardkat at 10:41 AM 8 comments

Manilow is comin' to town. 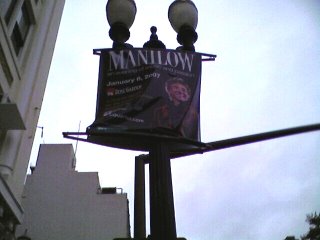 It started with an advertisement in my email box.
One innocent click later and I spied them.
There they were in luscious bone colored suede.
The boots of my dreams!
It was love at first click. It was now my life's quest to obtain them. A quest that only a woman could truly understand.
I zoomed over and picked up No Name and we swooped over to the Mall.
We trotted over to the shoe store and YES! There they were, in my size!
I think I might have squealed a high pitch girlie squeal.
I'm pleading the 5th and blaming the noise on rabid Mall squirrels.

Several purchases and multiple stores later, No Name and I wrapped up our shopping spree at the land of book goodness, Barnes & Noble.
Nora Roberts 3rd book of the Circle Trilogy was in and Robert B. Parker's new book was in. Could this day be any better?!

Exhausted, I slumped into an easy chair in a corner while No Name continued his pursuit of a book. I shared my corner with a spry looking white haired lady who was quietly sipping on a Starbucks coffee.

She pointed out to me that I must be a "true" Northwestener as it was pouring rain outside and I was in shorts and a sweatshirt. I laughed and told her I was in shorts because I had a knee doctor's appointment earlier and wore the shorts in a vain attempt to avoid wearing one of those horrid patient paper gowns.

She nodded approvingly at my wisdom. I didn't divulge to her that while my plan was a most excellent one, I ended up having to wear the &$#! paper gown because in my attempt to compromise wearing shorts in the pouring rain with a warm sweatshirt...I forgot about the injury to my arm that I needed the doctor to look at.

To divert my thoughts from the paper gown humiliating memory still too &%#! fresh in my mind, I politely asked her where she was from.

"Southern California." She said with a smile. Then she hunched over her coffee and muttered bitterly, "But I've lived here for the past 41 years and I hate...HATE the rain!"

She chattered on how she had plans to move back to Southern California when she retired but then her son of 41 years decided he wanted a child so his wife got pregnant and now she had a grandson. Her face warmed when she spoke of her grandson.

"I have him most weekends and would take him more if his parents let me. I just love him and could never think of leaving him to move back to California." The glow slipped from her face and she once again hunkered over her coffee sliding a baleful look out the window at the cursed Northwest rain.

"Well, maybe you can move to California when your grandson is grown." I offered in a small attempt to cheer her.

I spoke to her of my adopted Mom who is now 80 and spry as ever. How she biked and swam every day. How she had raised me to believe that the number game of age is mostly a mental thing.

She brightened a bit at that. Apparently she came from a genetic line of long lifers. But, then her face clouded again as she explained how her husband was currently laid up with a hip injury.

"He had a fall, you see. He was mowing our son's lawn. Something he loves to do. When he slipped and fell 10 feet down a hill and hurt his hip. He used to be so active but now except to attend physical therapy, he just wants to lay in bed."

We sat quietly for a few minutes looking down and avoiding eye contact from the truth that she most likely would never move back to her home town in Southern California.

"He comes from a family that are active until they get hurt, then once they are down, they stay down." She added quietly. "Nothing I say to him will get him up. He cries that he's hurting and refuses to get up and live life again."

I saw the pain flicker across her face as she slid her eyes from mine and looked down into her cup of coffee. It wasn't the rain she was railing at. It was the helplessness of watching the man she had been married to for 50+ years lay down and quit on life.

I thought about it that evening when I lay in bed, staring into the grey of the night while Guido purred softly beside me. I thought about it in the morning while my mind was busy trying to shake the dark shadows of a dream that has been haunting me.

Then, sitting at work, halfway through my first cup of coffee, it hit me.

When wounded in this life, you can choose to lay down and cease living because to continue to live, hurts.

Or you can work through that hurt and keep moving. Keep living, no matter the pain, because eventually the pain will fade with continual movement. The key to recovery is movement.

You have to keep moving.

I'm trudging on, folks. And I've got a hot pair of boots to do it in.
Posted by Haphazardkat at 7:19 AM 9 comments

Posted by Haphazardkat at 6:50 AM 6 comments